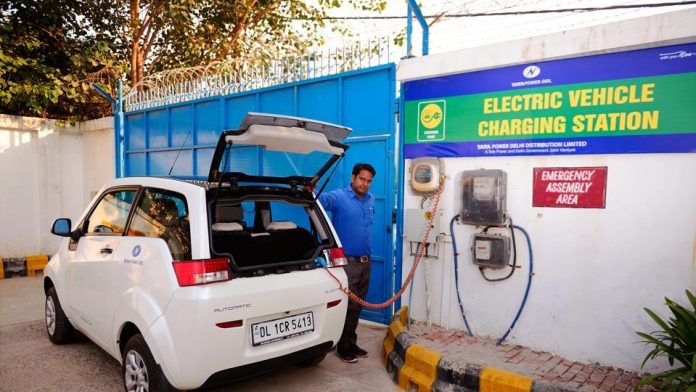 Just few months ahead of completing five year term, the government, though very late, has finally realized the importance of worldwide changing scenario in the auto sector which is shifting from petrol and diesel to electric vehicles.

To promote usage of electric vehicles, which are environment friendly, an enabling fiscal environment for its related infrastructure is necessitated. It was proposed in Budget 2018-2019 that 16 per cent customs duty on charging stations for electric vehicles may be withdrawn. Further, custom duty on import of electric cars has been reduced from 50 per cent to 25 per cent in addition to exemption from regulatory duty of 15 per cent. Import of CKD kits for assembly of domestically produced electric cars is proposed at 10 per cent.
Auto sector people who have a vision to see electric vehicles on Pakistani roads in coming years have welcomed the budgetary measure especially for promoting electric cars.

The 2016-2021 Auto Development Policy (ADP) had already set the course for new entrants in green field and brown field status but only one assembler had cautiously unveiled its plan to introduce electric vehicles depending on the response from customers, government’s support and available infrastructure.

The decision to provide relief for the import and local assembly of electric vehicles will definitely benefit the consumers in the long run, says Chairman Association of Pakistan Motorcycle Assemblers (APMA), Mohammad Sabir Shaikh hoping that the new government, which will come into power after the election, will further focus on electric vehicles especially cars and bikes.

The decision comes after Germany’s top administrative court ruled in February that cities could ban diesel motors to improve air quality.
Justifying the crackdown on diesel cars, Hamburg’s senate explicitly made a link to the diesel gate scandal which came to light in 2015 when Volkswagen was found to be using “defeat devices”, a cheat software that made the vehicles pollute the air less heavily only under test conditions.

However, Sabir said Pakistan and the Japanese auto assemblers are still too far to practically realize the future trend in four wheelers and the planners are still taking too much time on banning older diesel cars and trucks as a lot of homework is needed to be done before taking the stakeholders into confidence. Pakistani transport and trade goods movement survive on diesel run trucks, trawlers and light commercial vehicles.
Before electric, hybrid and concept vehicles the governments all over the world has closed down the trade of two strokes vehicles especially two wheelers. Though late, Pakistan had successfully followed the suit.

In Pakistan, vehicle population has been rising alarmingly and there is a need to close down the production of 50cc to 100cc bikes as this will at least lower the traffic load and rush on the roads, he said.

The price of 70-100cc is very low and as a result many people own at least two bikes simultaneously. No law exists which can remove bad condition and decades old used bikes of 70-100cc bikes from the roads. Technically the life of these bikes being assembled in Pakistan is not more than five to six years.

Sabir said when the industry will move towards electric vehicles – people will witness a big change on the roads and it will also clear old vehicles rapidly. Same situation may also apply on electric bikes in which China has already taken the lead.
The government, he said, has taken a bold step by maintaining its decision of disbanding Engineering Development Board (EDB) which was infamous of supporting a cartel of Japanese bike and car assemblers.

Sabir said the government should also take another step by setting up a committee for electric vehicle manufacturers under the Federal Ministry of Industries and Production in which people belonging to Federal Board of Revenue, PSQCA and private sector stakeholders involved in assembly of electric vehicles would be given memberships.
In the next two to three years – electric cars and electric bikes will take the markets by storm as per foreign media reports.

China is getting involved in electric bikes and cars and investing heavily to give a tough competition to European, American and Japanese rivals.
Sabir Sheikh said surprisingly the existing assemblers have not shown any sign of introducing imported electric vehicles or any plan to assemble these electric vehicles as they believe that cars running on petrol and diesel will exist for at least next 10 years in Pakistan. This is also evident from the investment plans of new entrants in which majority of them have planned to roll out diesel and petrol driven vehicles instead of electric vehicles.

APMA chief said the new government, which will come into power, should take notice of the future development in auto sector and announce new policy measures which would attract new players to introduce electric cars and bikes in Pakistan.
He said if the existing assemblers are not ready to come up with any plan for electric vehicle assembly, the government should encourage new investors by providing industrial lands at concessional rates with installment facilities.

China will lead the transition from internal combustion engines to electric cars, with EV sales accounting for almost 50 per cent of the global market from now to 2,025 and 39 per cent in 2030, Sabir said quoting international media reports.
China is also leading the charge on e-buses, with several major Chinese cities on track to fully electrify their e-bus fleets by 2,020 and some even sooner. China’s push is as much about industrial policy as it is about environmental or energy security concerns. China is building national champions and an e-mobility ecosystem for what it sees as a major strategic industry over the coming decades.

National, regional and municipal policies in China are all pushing the EV market forward. National subsidies are being phased out by 2,020, but beginning in 2019 automakers will be forced into EVs through the ‘New Energy Vehicle’ credit system. Similar to a program in California, the system effectively acts as an EV quota, requiring automakers to generate credits through the sale of EVs. Automakers who do not sell enough EVs are forced to buy credits from competitors.
This is the single most important piece of EV policy globally and is shaping automakers’ electrification plans. Industry pundits expect China to increase the quota in order to hit its 2025 target of EVs representing 20 per cent of vehicle sales in the country.
EVs reach almost 10 per cent of total Chinese passenger vehicle sales in 2,022, 19 per cent in 2025, then 41 per cent by 2030 and 60 per cent by 2040.
As per foreign media reports, the market is expected to slow down in the 2030s due to infrastructure constraints, particularly in high density cities where opportunities to charge at home are limited. By 2,040, we expect China to have 200 million EVs on the road.

Sales of electric vehicles (EVs) increasing from a record 1.1 million worldwide in 2017, to 11 million in 2,025 and then surging to 30 million in 2,030 as they become cheaper to make than internal combustion engine (ICE) cars.
China will lead this transition, with sales there accounting for almost 50 per cent of the global EV market in 2025 and 39 per cent in 2030. China also leads on percentage adoption, with EVs accounting for 19 per cent of all passenger vehicle sales in China in 2025. Europe is next at 14 per cent, followed by the U.S. at 11 per cent.

The number of ICE vehicles sold per year (gasoline or diesel) is expected to start declining in the mid 2020s, as EVs bite hard into their market.
By 2040, 55 per cent of all new car sales and 33 per cent of the global fleet will be electric.
China is and will continue to be the largest EV market in the world through 2,040.
The upfront cost of EVs will become competitive on an unsubsidized basis starting in 2,024. By 2,029, most segments reach parity as battery prices continue to fall.Buses will go electric faster than light duty vehicles.