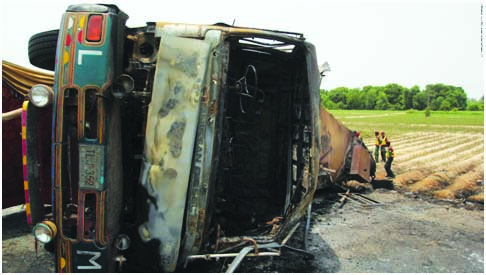 Curiosity and questioning is something that allows us to revisit and change our lives as well as our nation’s future.

So I wish to begin with asking some basic questions.
• How many cases of traffic accidents do we hear everyday?
• How many of them cause fatalities?

• How many of them cause permanent physical disability?
• How many of the accidents happen due to HCVs?
• What if a massive gigantic structure in any case of harsh braking overturns?
• What if an explosive material spills out of the fuel tank as a result of overturn?
• Could a heavy commercial vehicle carrying tons of fuel be regarded as a mobile bomb?

There are so many questions that arise in our mind and all of them invite us to think the possible causes of road disasters.

Is it the lack of safety in products? Or Inadequate driver training? How could we contribute positively in reducing the occurrences of disasters.

What if we enhance braking safety in trailers and avoid such cases to a greater extent by making use of globally renowned technologies.

The world is advancing at a greater pace but it is our nation’s dilemma that we are not making up to it. As a matter of fact, we lag behind in awareness or somehow adaptation of technologies such that we have madea trend of gaining admittance later than those of worldwide countries.

If we look at heavy vehicle fleet in our nation, mostly they are outdated and have little or no brake safety, or safety of any kind which results in disastrous incidents which jeopardizes thousands of innocent lives.

With our Corporate Social Responsibility at AUTOCOM, we tend to create awareness about importance of safety in HCVs every now and then.

Our Mission Statement says that:
We will continue to innovate and lead the specialized vehicle industry by providing safe and economical solutions that benefit out stakeholders. Our goal is ultimate satisfaction for all business partners ensuring complete success of the organization.

Aligning ourselves to our mission, we embarked upon our journey in bringing EBS to Pakistan in collaboration with an American company back in 2015. This was a trailer for TOTAL PARCO with air suspension and Electronic braking technology successfully commissioned as a very first prototype vehicle which is still running successfully on roads with one of the leading fleet operators ‘Rasch Pvt. Ltd’.

It could also be called Brakes by Wire Technology that triggers electronic activation of the braking components;
As a basic advantage it:
• Reduces response and build-up times
• Reduces braking distance by several meters
• Is decisive in some situations
• Has an integrated ABS function

Having EBS on board we can assume safety for driver, cargo, trailer and the truck itself.
It also has an integrated function of ElectronicStability Control also referred to as Roll-Over Stability Support that helps prevent vehicle roll-over within physical limits and hence results in zero likelihood of overturning in case of harsh braking. It also supports the driver to avoid accidents at highway exits and during emergency maneuvers. As its basic working,it has a lateral sensor that detects when a trailer wheel is lifting and might lose contact with the ground. Hence it automatically brakes the trailer wheels before one side lifts from the ground Also the trailer speed is automatically reduced to restabilize the vehicle.In a nutshell The vehicle’s ECU analyzes wheel speed, load information and transverse acceleration data to detect the likelihood of vehicle roll-over before the driver realizes the risk and automatically applies the brakes.

EBS can be mounted and retrofitted to all trailer types, including road trains, bi-trains and tri-trains and also either with Air suspension or Mechanical suspension.

With EBS, the trailer is equipped with an Electronic Control Unit with different GIO Ports.GIO means Generic Input/output and designates programmable inputs and outputs. The Trailer EBS E-Modulator has 4 GIO slots in the standard version and 7 GIO slots in the Premium version. The GIO functions enables various additional functions to be activated in the trailer modulator.

There could be an electronic extension module with which we could install “Tail Guard”.
Tail Guard is basically a support system for blind Spot Detection in the trailers:
It;
• Ensures Safety while reversing
• Detects small, large, static and moving objects in the blind spot behind the trailer
• Automatically brakes the trailer while reversing within 50-200cm from objects and walls located in the rear blind spot
• Activated when the driver shifts into reverse
• Uses ultrasonic sensors to measure distance to objects behind the trailer
• Warns the driver by pulsing the brakes when the reversing speed is higher than 9km/h

AUTOCOM in its journey of technological advancement reached an extra mile when we delivered a prototype to Shell Pakistan Pvt Ltd with EBS, Tail guard and Smart Board installed in 2016.

Later in the same year AUTOCOM conducted seminar titled “Promoting Safety on Carriage of Petroleum Products by Road”inwhich we invited foreign partners to speak about the global technologies for our product that moves around making product more safe and reliable.

We also did advocate EBS by making a small presentation about its benefits and value for money. It got media coverage and customer admittance to a greater extent.

In totality we have delivered approximately 100 trailers till date with Electronic braking system on board and also we are carrying out EBS retrofitting job in those trailers which are not even manufactured by AUTOCOM.

As a part of promoting this very useful system we are intending to supply FOC installation to one of the vehicles in PSO fleet with air suspension.

Furthermore, we have introduced the same technology in our newly developed Aluminum 56KL tank quite recently.

In addition to this, AUTOCOM has invited our valued customers to join us for a short training on EBS troubleshooting and maintenance in coming month, so that this system remains operational and reliable forever.

Safety is a journey and not a destination but we believe in beginning from somewhere. So we lay a red carpet to all those who advocate safety primarily and want to join hands for national interest along with benefitting humanity and mankind.