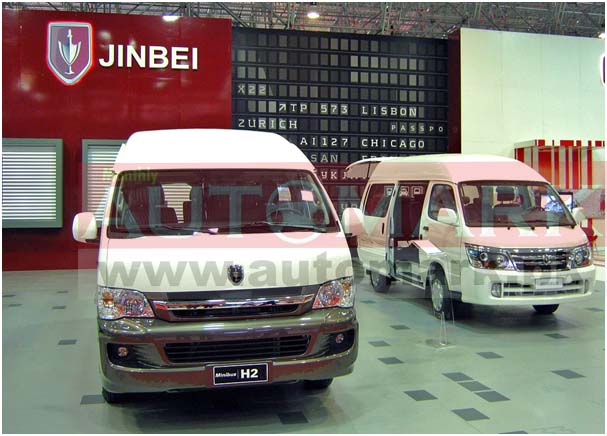 Jinbei, one of the most popular and leading commercial vehicle brand of China, is owned by Brilliance Auto Group, the exclusive joint-venture partner and manufacturer of BMW in China. Further, Jinbei is the only Chinese brand utilizing Toyota’s state-of-the-art manufacturing technology while being supported by engineers trained by BMW. In China, Jinbei has been the market leader for over 25 years and dominates the minibus (van) segment with a 60% market share. The brand has a presence in over 80 countries with over one million units sold globally.

Brilliance Auto’s cooperation with Toyota Japan began in 1988. As a model of technical cooperation with Toyota for over 30 years, Jinbei Haise is the only Haise series of products adapting the technologies, moulds and management approach of Toyota. Since early-1990s, Jinbei Haise (both H1 and H2 series) have been the flagship product line of Brilliance Auto in the light bus market. It has been unprecedented in the development history of China’s auto industry and its glory as a light bus sales champion for 25 consecutive years. In this process, Jinbei has achieved large-scale product upgrading from the first to sixth generation models, and has mastered the key technology patents of both completed vehicles and core components and parts, continually launching competitive green vehicles featuring high technologies, low carbon emissions and low energy consumption.

Further, in December 2017 Groupe Renault entered into a joint venture with Brilliance Auto to develop, manufacture and sell LCVs (mainly MPVs, light and medium vans) under the Jinbei brand. The joint venture aims to sell 150,000 units in China annually by 2022.

Zenith Automotive (Pvt) Ltd., an ARG company and the exclusive distributor & progressive assembler of Jinbei brand in Pakistan, has introduced the widest range of minivans and vans for both commercial and passenger use customized for the Pakistani market. During the first phase of launch, the local partner of Jinbei will be selling the following four models in CBU condition:

X30 offers both style and utility with a beautiful exterior along with a sedan-like comfortable interior, a spacious passenger cabin and a huge cargo space. The 4.2 meter long 11-seats Multi Purpose Van is powered by a 1.3L fuel efficient gasoline engine, which is ideal for the Pakistani consumers.

X30L is the long chassis high-roof version of X30 that offers more space, power and comfort. It is 4.5 meters in length with 11 person seating capacity. The powerful 1.5L gasoline engine along with other interior features makes the driving experience pleasure for both driver and passengers.

H1 has already been very popular in Pakistan since almost a decade with hundreds of satisfied customers throughout the country. This 5.4 meters long high-roof Hiase is powered by the very popular and durable 2.2L JM491Q ME gasoline engine offering 14 & 15 seat variants. As per the feedback from its Pakistani users, due to its exclusive manufacturing collaboration with Toyota, it has been one of the most reliable vehicles in this category to have been sold in Pakistan until today.

The stylish H2 is the new generation of wide long-wheelbase high-roof Jinbei Hiase series model, available in 15 and 16 seat variants. Jinbei H2 offers a sedan-like interior and a comfortable passenger cabin space with a convenient seating layout. It is powered by either the 2.4L 4RB2 or the 2.7L 3TZ powerful gasoline engines made under technical collaboration with Toyota Japan.

During phase two, the company plans to setup CKD assembly to not only assemble Jinbei light commercial vans and trucks but also selected Brilliance passenger cars for both local and export markets.
Jinbei’s official entry in Pakistan is good news for all the existing Jinbei customers as well, as the company has already started providing after sales support to them. Currently, the company is setting up their nation-wide 3S dealership network while simultaneously catering to existing customers and potential fleet sales inquiries.