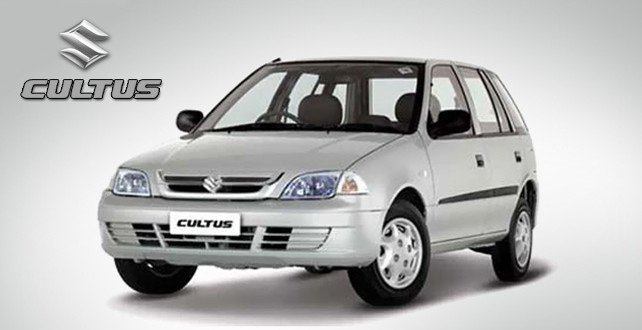 Suzuki Cultus a car known for its Executive looks was launched in Pakistan in 2000 by Pak Suzuki with 3 Cylinder 1000cc Carbureted Engine and 5 Gear Manual Transmission. The Car was very basic in its outlook and was launched with the three variant that was VX, VXR& VXL. Due to its sleek hatchback shape and economical price it became the Apple of the eye, or you can say it was the only hatchback at that time which had good space from inside while maintaining its sleek exterior. The Interior was luxury according to its price tag. The drive was comfortable. The rear Suspension was Independent which provides the smooth drive even on bumpy roads. In 2001 the Production of Factory Fitted CNG started so it became convenient to the buyers..

In 2005, Pak Suzuki discontinued the VX variant while the VXR & VXL remain produced. Although the vehicle had not any Safety feature like SRS Air Bags or ABS but still it was ruling the market very well.

In 2007, Pak Suzuki brought a major change in the heart of Cultus and that was the EFI ENGINE. The Old 3 Cylinders carbureted engine was replaced with New 4 Cylinders EFI (Electronic Fuel Injection) Engine while the Transmission remains same. The EFI engine provides the better fuel average than the carbureted engine because the everything in EFI Engine works on the basis of Sensors & Actuators which controlled by ECU (Electronic Control Unit) while improving power and torque delivery as well.The available variants were now called as VXRi and VXLi.

In 2010, Pak Suzuki Launched Suzuki Swift, but their own Cultus VXLi became the competitor to the new Swift so they had to discontinued the production of VXLi to boost up the Sales of newly launched Swift.

In 2012, Pak Suzuki introduced Euro II technology. It is used to prevent harmful emissions from the vehicle and make the environment friendly. Vehicles with EURO Technology also known as Green Vehicles.

In 2016, Pak Suzuki rolled out with the Limited Edition of Cultus. The Shape was same but still some cosmetic changes were made that included new door trims & fabric, 2-DIN sound system, matching door mirrors and alloy rims. The price of the final edition Cultus went up to PKR 11.24 lac for the Euro-II and PKR 11.99 for the Euro-II CNG variant.

This Limited Edition of Cultus remains Continued for about 1 year. In Feb 2017, Pak Suzuki representatives mentioned in a press release about the discontinuation of bookings of Cultus. The Journey of 17 years of Cultus was about to end, and revived in a new mode altogether.

After the discontinuation of Cultus, pictures of New Cultus already leaked and were roaming around the Internet. It became the hot topic for all Automotive Sites/Bloggers and Automotive Enthusiast. Many of them Praise the Car because they did not expect such type of modernized Car from SUZUKI.

In April 2017, Pak Suzuki officially launched the NEW CULTUS with its new Dynamic and Sleek hatchback Shape and with wide luxurious interior.Internationally this car is known as Suzuki Celerio and in Pakistan people also expected the same name but it was launched with the name of CULTUS. The car has new 1000cc, 3 cylinder K-series EFI Engine and 5 gear manual Transmission front wheel drive. The shape was totally different from its old model. The car is also equipped with Key-less entry & Immobilizer (Anti-Theft Security System). Inthis ignition key is encoded for exclusive use with the immobilizer only; therefore, it is impossible to start the engine without the original encoded ignition key. The New Cultus is also equipped with Electronic Power Steering System, Power Windows, Powered Mirrors which can be adjust from driving side, Fog lamps, Chromed front grill, Alloy Rims, ABS (Anti-lock braking system) and best feature regarding Safety is SRS Dual Airbags, one for driver and other for the front passenger while this the only locally manufactured car by Pak Suzuki which is equipped with Airbags. Although this car has not came with factory fitted CNG. The new Cultus is currently available in 7 colors i.e Pearl Red, Graphite Gray, White, Super Pearl Black, Cerulean Blue, Silky Silver & Sand Beige.This New Cultus came up with two variants that is VXR & VXL.

All the Authorized Dealers have started to provide free Test Drive of this New Cultus from23rd of April. On the same day the test drives started, many People Exchanged their old Suzuki Vehicle with the new Suzuki Cultus with Suzuki Exchange Program. Overall New Suzuki Cultus 2017 is perfect hatchback car that is added into the collection Pak Suzuki. Now everybody is waiting for the New Model of Suzuki Mehran and there is hope that it won’t be with just Cosmetic Changes!.