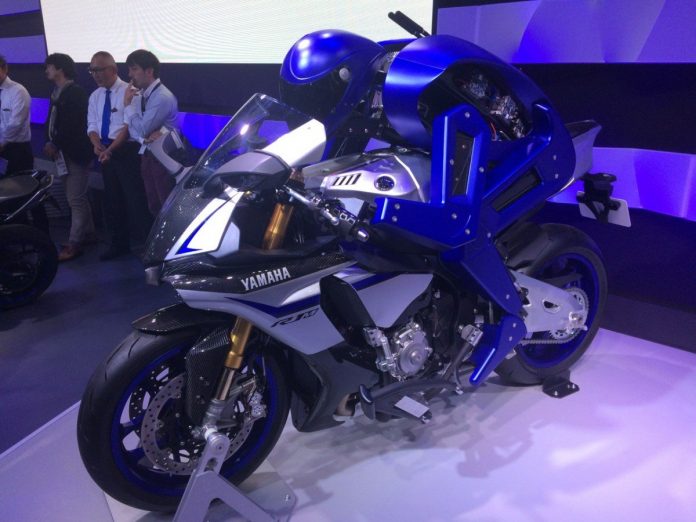 Yamaha is delving into the world of autonomous vehicles in a way fitting of the unique company that it is: by building a robot capable of piloting a motorcycle better than a human can—but not just any human: nine-time MotoGP champion Valentino Rossi, who won this year’s championship on a Yamaha YZR-M1 and who some consider practically super-human.
In one of the most astounding announcements at this year’s Tokyo Motor Show that, nevertheless, was somehow overshadowed by other unveilings—including the Hyundai IDS Concept and even Yamaha’s own Sports Ride Concept—the Japanese maker of motorcycles and musical instruments revealed an “autonomous motorcycle-riding humanoid robot” called Motobot.
The blue, human-shaped machine has stationary arm- and leg-like appendages. It also has a head, and the entire robot is mounted atop the company’s flagship YZF-R1 motorcycle, looking very much like a professional MotoGP racer crouching low toward the handlebars to accelerate down a racetrack.
Yamaha’s goal with the Motobot project is to apply three decades of know-how creating assembly robots for industrial applications in a thinking machine of another sort.
Most robots in use today perform a single task with precision beyond what a human can do, such as joining together two heavy metal parts and creating a series of precise welds in a matter of seconds, for example, or torquing down 20 bolts at varying levels of tightness, all at once and with exacting precision.
Motobot, however, is far more complicated. It must be capable of performing innumerable fine adjustments to control the complex motions of a motorcycle—something humans can do relatively easily, but robots cannot.
The project is not an end unto itself, though. Yamaha plans to apply what it learns in building Motobot to improve its other lines of business, which include motorcycles, snowmobiles, ATVs, musical instruments, industrial robots, and more.
“We want to apply the fundamental technology and know-how gained in the process of this challenge to the creation of advanced rider safety and rider-support systems, and put them to use in our current businesses, as well as using them to pioneer new lines of business,” Yamaha said in a release announcing the Motobot.
So while other automakers are focusing their attention on making vehicles autonomous, Yamaha is looking instead to creating autonomous robots that can pilot a regular vehicle, such as a motorcycle, without modification. The potential for robotic chauffeurs comes to mind, but Yamaha did not make mention of such plans.
Motobot has six actuators for the steering, throttle, front brake, rear brake, clutch and gearshift pedal. Eventually, the goal is to employ high-precision GPS, various sensors and artificial intelligence—what Yamaha calls “machine learning”—to “enable Motobot to make its own decisions regarding the best lines to take around a racetrack and the limits of the motorcycle’s performance, so that it can improve its lap times with successive laps of the track,” the company said.
By the end of this year, Yamaha aims to have Motobot capable of cornering, running a slalom course, and riding in a straight line up to 62 miles per hour. By 2017, the goal is to have Motobot lap a racetrack at 124 miles per hour or higher and start to develop capabilities that exceed those of a human rider.
Yamaha anticipates that Motobot will be adaptable to other vehicles like snowmobiles and personal watercraft. By 2020, the company hopes to start incorporating technology and learnings from the Motobot project into consumer products.
“By using Motobot technologies to optimize control of vehicle dynamics, we will develop higher performing and safer forms of mobility,” the company said.
In total, Yamaha unveiled six world debuts at the Tokyo Motor Show, besides the Motobot. These include a sports car design study called the Sports Ride Concept, a three-wheeled motorcycle called the MWT-9, two electric motorcycles—including one called the PES2, with innovative two-wheel drive—an electric mountain bike, and a retro-styled motorcycle called the Resonator125.
The 2015 Tokyo Motor Show opened to the public October 30, following two press days, and runs through November 8.