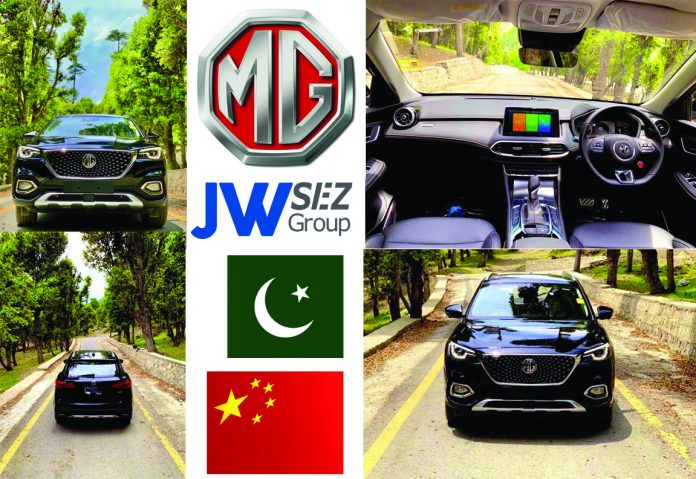 JW SEZ group have introduced the European brand SUVs in Pakistan. A Morris Garages (MG) car was previously owned by Quaid-e- Azam Muhammad Ali Jinnah.
The MG HS Model was spotted in Kalam, Sawat (Khyber Pakhtunkhwa). The SUV is being used for test drive, as per our sources.

Jawed Afridi, has share pictures of the variant on his social media pages.
These variant are imported from China in CBU condition. The bookings of SUV in CBU will commence from June 2020 in Pakistan. Company is willing to assemble these brand of variants in Pakistan by next year under Auto Policy.

The MG HS back in March, 2020 was named the ‘Car of the Year’ in Middle East by a panel which comprised of the region’s leading automotive experts. Following that title, MG HS was also awarded to be the ‘‘Best Sub-compact Crossover’.

The SUV will be giving a tough competition to the current market favorite Korean brands. MG HS has a 2.0L high efficiency turbo petrol engine and is proficient in creating a thrilling 231PS and maximum torque of 360NM. The front wheel has a comfortable and an intelligent ALL Wheel Drive (AWD) system.

It provides the top speed of 210 km/h and combines it seamlessly with the six-speed dual clutch transmission gearbox. It is equipped with Eco, Normal, comfort and Sports driving style – the sports style will have adrenaline rushing through you. It has a sports response system that will release the maximum torque for the best acceleration you have ever experienced.

MG HS will have European standard car features owing to its British roots. For instance, the car as a 10.1 inch touchscreen which can connect to Apple car play, Android Auto, GPs, Navigation in an instant. It has a premium audio system along with Air quality management system which purifies air in less than 3 minutes!
When it comes to safety, you can be assured of MG HS with a 5 Star Euro NCAP safety standards.

The SUV is also expected to be quite reasonably priced given the taxation benefits, hence further fueling up the competition against the Korean SUV in Pakistan. Sources confirmed to Automark.

About JW Auto Park
Their plant was launched in 2018 in November and they are the first Pakistani company which has a 50% partnership with a Chinese company which is Changsha Foton Vehicle Technology Co. Ltd. The venture Foton JW Auto Park (Pvt.) Ltd. is the biggest private venture of electric car manufacturing in Pakistan.

The Futon JW Auto Park will be inaugurated by Chinese President Xi Jinping in his visit to Pakistan in June. JW Auto is also going to sign the MOU with Morris Garages electric vehicles.

MG Motor UK Limited (MG Motor) is a British automotive company headquartered in Longbridge, Birmingham, England, and a subsidiary of SAIC Motor UK, which in turn is owned by the Shanghai-based Chinese state-owned automotive SAIC Motor.
The initial investment was 150 million by both companies and the joint venture established an assembly plant after receiving Greenfield status.

Both parties plan to further expand the plant capacity to 100,000 units per year with 100 acres of land to increase its product range in the future.

This will not bring jobs to local Pakistanis but also help push the economy upwards. A silver lining Pakistani Auto Industry desperately needs in the recent phase of recession.
JW has been the silent leader in the Auto Industry and quiet the newsmaker. In its plans for the next 5 years, Foton JW Auto Park also aims to become the leading commercial vehicle manufacturer in Pakistan.