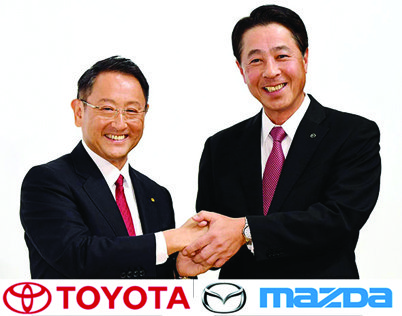 Toyota is joining forces with Mazda to create a new company which will develop electric cars. The two manufacturers are pairing with Denso Corporation to develop structural technologies for electric cars. Engineers from each of the companies will join together to develop the technology.

Toyota will own the lions share of the business with a 90 per cent stake while Denso and Mazda each take a five per cent. The new company is called EV Common Architecture Spirt Co Ltd. Cars produced by the new company will use the same platform that vehicle such as the Prius and 2018 Camry.

Plans detail that a plethora of cars will be produced on the platform including SUVs, supermini and light trucks to name a few. Toyota has been manufacturing petrol-electric hybrids for a number of years now but has been pipped to the post by its rivals when it comes to introducing full EVs.

Mazda revealed earlier this year details about its internal combustion petrol engine the SkyActiv-X which allegedly produced diesel-like fuel-economy and performance but less emissions. From 2019 the car manufacturer will add electrified vehicles into all of the models in its range. In the statement provided by the company it reveals three points that the company want to hit.

The new company will engage in the following:

1. Research into the characteristics (common architecture) that define optimum performance and functions of EVs from the standpoint of both individual components and the whole vehicle.

2. Verification of component installation and vehicle performance realised by the characteristics  achieved in item 1)

3. Examination of the optimum concept for each car classification with regard to each component and each type of vehicle realised by achieving items 1) and 2).