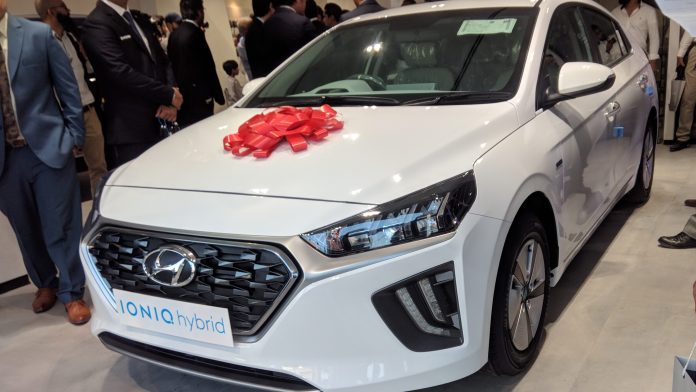 At a time, when the Pakistan Auto sector is facing tough challenges due to unstable economic conditions, Hyundai Nishat Motor (Private) Limited has launched a digital store in Karachi and along with that their new car Ioniq Hybrid.

On Oct, 8th, during the launch of their digital showroom in Karachi the company Hyundai Nishat Motors Private Ltd (HNMPL) has announced to start local assembly of porter H100 with 20% indigenization from January next year. Their CEO, Tatsuya Sato, speaking to Automark reporter said that theoverall investment in the manufacturing facility of Faisalabad is around $150 million. The yearly production capacity of the facility is up to 15,000 units and the plant would be able to open up 250 employment opportunities for the local people.

Moving forward he mentioned that the company will start with 20% local parts and in the next five years take this up to 45% as localmanufacturing is the only way to compete in the market. He also said that Pakistan has the potential to export, with increased advent of eCommerce and new technologies Pakistan will soon be able to produce cost effective cars.

However, let’s jump onto the new car Ioniq Hybrid launched by Hyundai Nishat Motor (Private) Limited. The launching price of Hyundai is Rs. 6,399,000 and you can book it with fifty percent downpayment payment. With its price range segmented as Toyota Prius, both automobiles will be neck to neck in the Pakistani market.

The Prius was initially launched in Pakistan with an intent of locally produced hybrid; this however,didn’t go as planned. In practice, Toyota’s engine is bigger than the Ioniq but in terms of raw KMPL (Kilometers/ Liter), driving dynamics and being a plug-in hybrid, Ioniq outruns the competition. It can be purchased off the shelf as a firsthand vehicle where the former is available as a secondhand imported vehicle.

Hyundai IONIQ is equipped witha 7.0-inch touchscreen with Apple CarPlay and Android Auto com. The SEL trim level is our pick of the bunch with heated front seats, a power-adjustable driver’s seat and a 7.0-inch digital instrument cluster. Besides that, the car offers enhanced voice-recognition features and standard remote charge management for Plug-in and Electric models.

It is worth mentioning that in 2019, Ioniq Hybrid was voted as IIHS’ Top Safety Pick for the variant which is equipped with Automatic Emergency Braking and HID headlights.

It offers multiple safety features and some of them are Anti-lock brakes which by modulating brake pressure upsurge the vehicle’s capability to turn while braking. They also have Blind Spot Detection (BSD) and Rear Cross-traffic Alert (RCTA). It haseight airbags to cushion collision from all crucial points.

Hybrid Ioniq gets a 1.6-liter inline-4 that produces 104 horsepower and 109 pound-feet of torque. The engine is supplemented with a 32-kilo watt (43 hp) an electric motor that makes use of regenerative braking and a 1.56 kWh battery as well as solar charging in higher end models.

Hyundai has an elegant and defined look; the five-door liftback sedan has an overall height of 1450. It has striking design accents that are integrated into the smooth, sculpted surfaces of the bodywork. Along with that, it offers a 750 liters’trunk space and the high-strength steel and lightweight aluminum make the IONIQ strong, stable, agile & economical. With a power sunroof, chrome door handles and similar design of rear headlights and front LEDs provide a unified look to the whole exterior

Although Hyundai might take some time to surge in the market but with a strong car like Ioniq which is no match for the likes of Chevy Volt and other hybrid vehicles. Hyundai has a strong reputation globallyenabling Korean’s to set foot into new consumer markets with an iron fist.

On daily basis, a common user the car with an average speed of 70 km/hr, does not require the petrol engine as the car can run on electric charge completely for ≈130 KMs. Although the price tag is at the higher end. We feel it is worth for the feature it offers and is the way forward for a Greener & economical Pakistan.