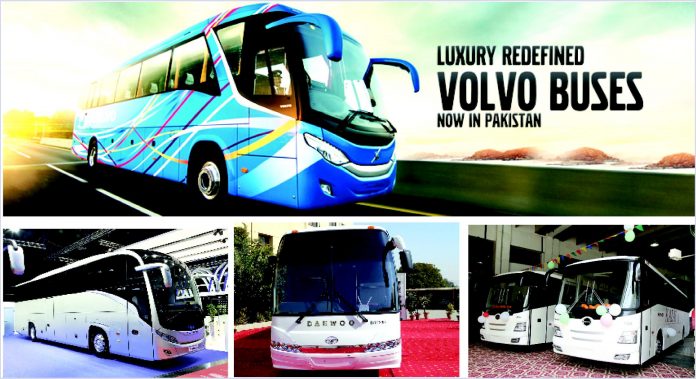 Imagine travelling in a bus where you can’t find a proper place to sit, where your head hits the roof and you sweat because the air conditions don’t work properly. Yes, a major proportion of Pakistani population faces such issues and the rest lucky ones are unaware of them. The intercity transport system of the country is not up to the standards. Transport system which takes passenger from one place to another within a city is not even worth for a comment.

Although the intercity is not up to mark but continuous efforts are done by investors to revolutionize the system with introducing latest models buses with highly advanced technological features along with damaging the environment least.Previously it was only Daewoo as the only assembler of luxury buses in Pakistan and it enjoyed being the only one for a long time.

Lately the number of assemblers has increased three including Hino and Master to the list. Master entered the market in 2002 and improved the played a significant role in improving the transport system. With selling more than 10,000 vehicles it gave them a good image which further helped them having contracts with other local transporters to purchase buses from them. The luxury buses offered by Master are no less than a comfort zone.

Hinopak also figured the increasing demand in safe and comfortable travelling, therefore came up with their luxury busses too. Recently Hinopak introduced their new product Kazay, which is witnessing good response and the sales are expected to increase in future too.

With all this we come to the fact that passengers are willing to pay a higher price if they are given better services. It is noted that if the travelling is safe and secure along with good atmosphere and hygienic food, the intercity transport industry is going to account for a major proportion for the country’s income.

Daewoo was not cooperating before as they were still making profits because of their established image and also people somehow had no other option. It is highly needed that people get deserved comfort level for the amount they pay. With pressure from different group it was seen that Daewoo introduced their new luxury bus BH120 which received a very good response.

The authorized distributor of Volvo in Pakistan also launched their new ultimate luxury bus tagged B11R. The latest B11R is highly fuel efficient which reduces the cost along with less carbon emission which means it has fewer negative impacts. VPL is surely going to set new, higher and better intercity travelling. Daewoo Express, the biggest bus operator of the country has booked 10 B11R which are expected to hit the streets in the mid of March.

Using latest and luxury buses is not only going to increase the profits of the bus operators but also many people who tend to use their own cars for travelling just because the services are not up to standards will also start using the services, which is going to help using less scarce oil resources and have a healthy environment because of low carbon emission.