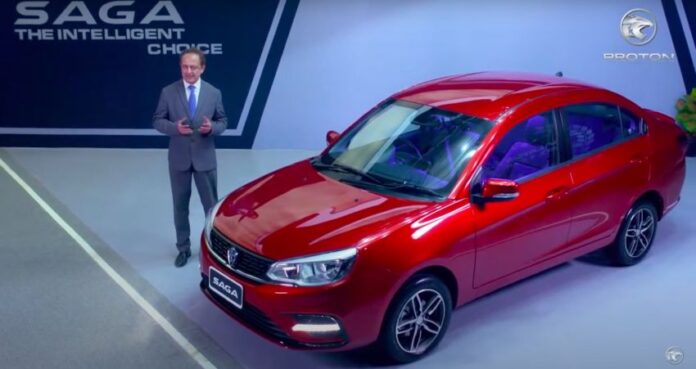 Following the introduction of the Proton X70 last December, Al-Haj Automotive, the authorised distributor and assembler of Proton vehicles in Pakistan, has now launched the more affordable Saga sedan in the country.

The Saga on sale there is being offered in five variants, including the Saga MT and AT, the range-topping Saga Ace AT, as well as the limited-edition Saga R3. What’s interesting is the Saga R3 in Pakistan is available with either an automatic or manual transmission – the latter is something we don’t get.

In terms of equipment, both the Saga MT and AT are similar to the Standard MT and AT variants we have here, including halogen headlamps, 14-inch steel wheels with plastic covers, rear parking sensors, powered side mirrors with indicators and remote trunk release.

Stepping up to the Ace AT, it matches the Premium variant in Malaysia, adding on LED daytime running lights, a small boot spoiler, 15-inch alloy wheels, a multi-function steering wheel, a seven-inch touchscreen media system with smartphone mirroring, a reverse camera and a N95 cabin filter.

As reported previously, the Saga sold in Pakistan is powered by a S4PE engine with a displacement of 1,299 cc, which is 33 cc less than the Malaysian model that has a capacity of 1,332 cc. The lower engine displacement of below 1.3 litres allows the Saga to be priced more competitively in Pakistan, thanks to the tax breaks it qualifies for with this classification.

According to Proton Pakistan, the engine makes 92 PS (91 hp) and 120 Nm of torque, and comes with an Eco Drive Assist mode. The transmission pairings include a four-speed torque converter automatic and a five-speed manual.

Safety-wise, the base MT and AT variants receive two front airbags, ABS and EBD as standard, while traction control and Electronic Stability Control (ESC) is only found on the Ace AT. There are six colours to choose from – Armour Silver, Ruby Red, Rosewood Maroon, Jet Grey, Snow White dan Quartz Black.

The Saga R3 is a little different than the MT, AT and Ace AT, as it uses the 1,332-cc engine that we have here. Equipped with the same kit as the Premium, the variant features cues inspired by the Sepang 1000KM race car, including a body kit consisting of a front spoiler lip, side skirts and accents in the official R3 colour, yellow.

The hue is seen on the front grille, front and rear windscreen stickers, as well as the side mirror caps. Other exterior touches include 15-inch alloys in matte grey, an R3 emblem on the boot lid and the race car’s number “82” that is part of the body decals.

Inside, more yellow accents can be seen on the centre console and the analogue meter cluster, complemented by an “R3 Limited Edition” emblem on the dashboard, R3-branded carpets, R3-embroidered leather seats and the stitching on the steering wheel.

Only 100 units of the Saga R3 will be offered in Pakistan, which is far less than the 2,000 units we get here. According to Proton Pakistan marketing manager Ibad Jamal, to ensure a fair chance for customers to secure a unit, they must first register their interest online, after which a lucky draw will be done to decide who is fortuitous to buy one.